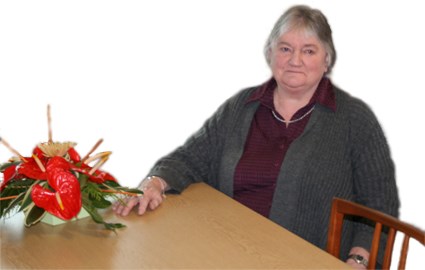 Mrs Susan Mary Meads was born in Stafford in 1937 and spent the war years in Cornwall with close family whilst her father served with the RAF. After the war, the family returned to Stafford where Mrs Meads was educated at Abbots Bromley School. Her University years were spent at Lady Margaret Hall, Oxford studying modern history. Following graduation she became a Research Assistant at Nuffield College, Oxford where she met her future husband.

The family moved to Cheriton Fitzpaine in 1962, where two sons were born. During her service on the Council, Mrs Meads qualified as a Solicitor in 1987.

First elected to Mid Devon District Council (then known as Tiverton District Council) at its inception on 21 June 1973, she remained a Councillor until 7 May 2007 being Chairman of the Council from 1991 to 1993 and Vice Chairman from 1989 to 1991. Her interest in community matters was reflected in the fact that she served on the Housing Services Committee, of which she held the office of Chairman and Vice Chairman for many years. This Committee subsequently became the Housing and Health Committee and then the Community Services Committee. As Chairman of Planning Committee from 2003 until 2007, she was held in very high regard. In addition to this she served on a number of other Committees during her 34 year service.

Our thoughts and deepest sympathies go out to her family, friends and colleagues.

Against customary tradition, we're unable to open a physical book of condolence due to the Coronavirus pandemic. Instead, we've setup this page as an e-Book of condolence for members of the public and Council colleagues to submit their comments and memories. A proper hard copy ‘Book of Condolence’ will be given to Susan's family when the restrictions are fully lifted.

How can I leave a message of condolence?

If you'd like to leave a message of condolence, please use our online form for publication below.

Please note: your name and message will be publicly viewable.

Susan Meads first became a District Councillor in 1973 and was one of the first 40 councillors that formed the new Council. During her time on the Council she represented the Cheriton Fitzpaine area where she lived and even after leaving the District Council in 2007 she continued to serve on her local Parish Council. She held many positions within the council. Vice Chairman of the Council from 1989 - 1991 and chairman 1991 - 1993. not wishing to sit back after these roles she became chair of the planning committee from 2003 until her retirement in 2007.

Her training as a solicitor ensured her presentations were clear and precise and her sharp legal mind could tie her opponents up in knots. Despite her serious approach, she was not adverse to playing a joke on her colleagues. I recall standing with her on the very top of the new multi story car park where as chairman she was performing the topping off ceremony and as she needed one hand for the trowel and the other for a brick she looked at me with a grin and said hold my handbag which I duly did not realising she was posing for the official photo and telling the photographer to take it quick I was pictured standing beside her wearing a Mayors chain and holding a handbag. A second take was called for and I hope the first one no longer exists.

Susan will leave a lot of fond memories behind and grateful constituents for all that she did, may I on behalf of all Councillors and Officers past and present of the Mid Devon District Council extend our deepest sympathy to her sons, family and friends on their sad loss and take comfort that she will be missed by many.

Honorary Alderman Mrs Meads was part of the first elected membership of the 'new' Mid Devon District Council in 1973, continuing her service for 34 years in a number of prominent roles, including Chairmanship of the Council from 1991-93. I am grateful to the current Chairman for sharing his own memories of those years, and I know there are many Officers still working for the Council that will remember Susan and her efforts to improve the lives of our residents. On behalf of the Officers, can I extend my sincere condolences to her family and friends.

I first met Susan when she came to Crediton on a Planning Committee site visit. A lady of great wisdom, experience and humour.

I was very sorry to hear of the death of Susan Meads one of the most distinguished members of the District Council.   She was a very committed representative of her community but always aware of the wider picture with a great knowledge of the whole district.  Through her professional background and her work with other outside bodies she was aware of the needs of vulnerable groups and was a great advocate for them.   Susan was a good and fair chairman of the Council and the various committees on which she served.   For many years she was the Council’s representative on Relate and was one of the founding Trustees of Coldharbour Mill.   She will be greatly missed for her knowledge and sense of humour.

I did not meet Susan before I was elected to MDDC in 1995. By reputation, I knew her to be a formidable character and my own experience soon proved the accuracy of that! We were always in different political camps, though increasingly I suspected that we were more kindred spirits than I had thought. From the start I had great respect for her, due to her intellect and oratory and as the years passed I became very fond of her. She had a great sense of humour and could lace that with some delightful barbs when she wanted to! Despite not always agreeing, we shared many enjoyable times together and it is a matter of great regret that her health became so poor. I will miss her company and counsel, as, I am sure, will so many, not least her family to whom she often referred with pride.

I remember Susan with great fondness. When I became a new councillor in 1992 Susan was welcoming, generous and kind in offering me support and sharing her experience to make my introduction to the role less daunting.

Susan served as my Vice Chairman when I took on the Chairmanship of the Housing and Health committee. She was always willing to share her immense store of knowledge and wisdom. Susan had the well deserved respect of all who knew and worked with her.

I will particularly remember Susan's tremendous sense of humour and some of the many laughs and light-hearted moments we shared.

My wife and I had the privilege of being a neighbour to Susan for many years. We always found her tremendously helpful and willing to offer advice. A real character and not one to mince words. We hold the memory of her in the highest affection. She will be sorely missed by us and the rest of our community.