Association of Electoral Administrators: "Every branch needs someone like Jackie Stoneman!" 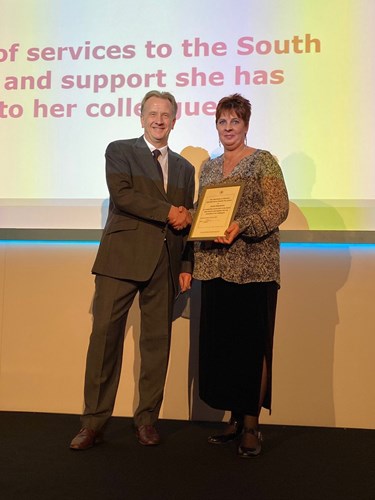 Jackie Stoneman, Electoral Services Manager at Mid Devon District Council, has received a national award in recognition for her support to the Association of Electoral Administrators (AEA), South West Branch, and contribution to electoral services.

AEA Chief Executive, Peter Stanyon, presented the award during the AEA Annual Conference, held at the Grand Hotel and Conference Centre in Blackpool, between the 2nd and 5th of February 2020.

The AEA award scheme was introduced for members who have made a much appreciated and valuable contribution to the work of the Association. Eight nominations were received for the 2020 awards, of which, Jackie's nomination for the AEA Outstanding Contribution Award for services to the South West Branch, had been submitted by colleagues from the South West Branch and AEA Management Team.

Jackie and her team are responsible for administering referendums; local and national elections, and; maintaining the electoral register of Mid Devon residents. In addition to her frantic day job and managing her small team, Jackie also fulfils the role of branch secretary for the South West.

“Jackie is, first and foremost, a superb electoral administrator of long-standing, and has an enviable record delivering elections and electoral registration at Mid Devon.

“This award is most befitting and recognition for the long overdue contribution she has made to our branch and electoral services generally. We were well aware that our decision to nominate Jackie would be very popular among our members, especially those colleagues in neighbouring local authorities who have known her for years, and who value her not just as a colleague, but also as a loyal supportive friend. Every branch needs someone like Jackie Stoneman!”

“I was really thrilled to receive this award. Being told you’re appreciated is one of the most uplifting things you can hear”.

The AEA is the leading professional body for electoral administrators in the UK. It provides support for everyone working in elections through the development of effective working practices and through the provision of training, professional qualifications, advice and networking.

The Association consists of eleven regional branches, which meet three or four times a year to give their members the opportunity to discuss matters relating to the conduct of elections and electoral registration, as well as the internal workings of the association.