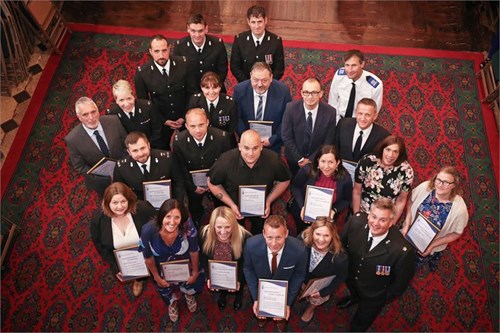 Adrian joined Mid Devon’s CCTV volunteers in April 2002 and progressed to the role of supervisor. In June 2007, he became a Police Support Volunteer for CCTV and has been instrumental in the policing of Tiverton – providing back up and support to local officers to help to catch some serious offenders, prevent crimes, and identify vulnerable people in Tiverton. He has been involved in several serious incidents whereby without Adrian, police would not have got a conviction or officers would have been injured.

The first award, a Citation for Outstanding Contribution, was presented by the Police and Crime Commissioner Alison Hernandez as part of the 2019 Devon and Cornwall Police Volunteer Awards, at St Mellion International Resort, Cornwall on Tuesday, 4 June. The citation was awarded in recognition for Adrian’s assistance in connection with a number of cases, including prevention of a retaliatory attack with the use of a samurai sword following a brawl outside a local pub, and the arrest of an individual for firing arrows at members of the public with a crossbow.

The Devon and Cornwall Police Volunteer Awards are held annually to commend outstanding support given by officers, staff and partners to policing across Exeter, East and Mid Devon.

Adrian’s second award, a Superintendent Certificate, was presented by Chief Superintendent Sam de Reya and Superintendent Matthew Lawler as part of the Exceptional Contribution to Policing in Devon Awards, at the Guildhall, Exeter on Wednesday, 19 June. The Superintendent Certificate was awarded to mark the meticulous surveillance work carried out by Adrian in April last year, where he helped to bring about an early arrest for police officers who were investigating an allegation of attempted rape in Tiverton. Adrian worked tirelessly to give the investigation team a starting point. He identified the suspects’ movements and worked towards giving police a location which led to the arrest. The investigation would not have succeeded without the commitment and effort shown by him, see Police praise Mid Devon Council employee after successful criminal investigation.

A total of 22 people were presented with awards at the Guildhall following nominations from officers, staff and partners. Local dignitaries in attendance at the ceremony included the Deputy Lord Mayor of Exeter, the Mayors of Cullompton, Honiton, Ottery St Mary and Crediton as well as Councillors from Tiverton and Sidmouth.

In response to receiving the awards and in typically modest fashion, Adrian said:

"To be fair, I wasn't even aware that I'd been nominated so I was pleasantly surprised to receive invites to attend these awards. Having said that, I'm very pleased and it's nice, really nice to be recognised for the work that I do to help prevent crime and catch offenders."

“It is incredibly humbling to present these awards to our officers, staff, volunteers and partners and is certainly one of the best parts of my job.

“The passion, resilience and dedication displayed by those recognised at the awards is outstanding. Our people work tirelessly to prevent crime, detect offences, support victims and bring offenders to justice and it is right we recognise them for their contribution to keeping our communities safe.”