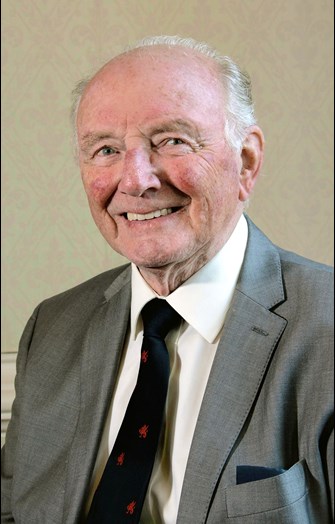 The Chairman of the Council, Les Cruwys, has paid tribute to Councillor Glanmor Hughes who passed away on Saturday, 10 April 2021.

"It is always sad to lose a friend and a colleague, we lose a piece from our jigsaw and for a while it's the most important piece. Glanmor had represented the Upper Culm ward since 2003 and became Vice Chairman of the Council from 2015 – 2017. He was a past Chairman of the Licencing and Regulatory Committee and held the position of Vice Chair of Scrutiny. His earlier life in the Police Force and skills from that profession stood him in good stead for scrutinising the work of the Council. Glanmor had quite a laid back attitude to Council meetings but would often interject with a short, sharp comment that usually summed up the views of others but in very few words. We will miss the smiling face of this jovial Welshman, we will miss his opinions.

May I on behalf of all Members and Officers of the Mid Devon District Council send our sincere condolences to his family and friends. We will miss him but his legacy in life will live on."

If you would like to leave a message of condolence for Glanmor, please use our online form:

I well recall Councillor Hughes once thanking me for being bold and telling him what I really thought during an informal conversation with him (long after members had taken a decision on something). However, the truth was that with Glanmor there was no need for boldness. Before the pandemic curtailed such things, he regularly used to stick his head into my office checking up on ‘how the boss was today’, before sitting down and regaling me with ward issues he was dealing with or stories of the times he dealt with various issues while in the Police. Always happy to speak his mind, I will remember with a smile his contributions at scrutiny and economy committees. Firstly, for the time he misheard a discussion about footfall in our town centres and proceeded to gently admonish the committee for spending far too much time talking about the sport with the wrong-shaped ball; and secondly, for once quoting Adam Smith during an economic committee – since 18th century economists are perhaps notable largely by their absence from most council committee discussion!

Councillor Hughes was an authoritative man whose interjections at council were always pointed, and who balanced those (sometimes short) comments with regular sidebars of good humour with members and officers alike. On behalf of the officers, I express my sincere condolences to his family.

I will miss Glanmor very much, he was a great friend of mine, I kept in regular touch with him, I could see he was failing, so sad to see. He was always smiling and he was a wonderful Councillor and very well thought of. He would tell me some unbelievable stories of how he went about his police job, many times it had to be, `not according to the protocol`, to catch criminals. I will miss him.

Good friend, good company, staunch supporter, a great raconteur with a fund of good stories - shall miss them, Glanmor. R.I.P.

Always a friendly word and a smile, larger than life yet often sought out to seek his opinion. A man of great integrity and pride. A loving husband, father and grandfather. He was my friend and I will forever remember him with fond memories. For the time we shared I thank him, for his advice I will forever benefit. The world today a little less interesting than it once was.

A strong welsh man, excellent speaker, stood his ground. Will be sadly missed

My thoughts and prayers are with you at this sad time. I had known Glanmor since we were both elected to MDDC in 2003 and it was a real pleasure to work with him.

It was a pleasure to serve alongside Glanmor for all of his near 18 years on the Council. In my role as Conservative group leader and Leader of Council for over 4 of those years, I can say without hesitation that Glanmor contributed with great thought and knowledge on a variety of subjects, not only on a group basis but also within Council. He will be greatly missed and our thoughts are with his family and friends.

We will miss you at our meetings thank for all the encouragement you have always given me. I will miss that smile when I’m in full council. Also your quirky remarks that made us laugh. I will do my best to keep our flag flying.

I first met Glanmor on the day that I was elected as a Councillor and what an honour it has been to say that I knew him. He had a wealth of information from his experiences of life and you could listen to him for an absolute age. My daughter and I had high regard for this wonderful gentleman. Our hearts go out to Glanmor's family. Christine and Lucy.

It was extremely sad to hear of the passing of Cllr Glanmor Hughes. I knew Glanmor for some 14 years, he already being a Councillor before I joined him in 2007. Glanmor was a valued colleague, friendly, someone you could turn to for advice, sometimes blunt but never with malice and a golden Welsh voice the sound of which will remain with me as I hear him say "for" when voting in Council meetings. You couldn't miss it.

However, above all he was a gentleman. He will be missed.

I worked with Glanmor for many years on the Scrutiny Committee and the Licensing and Regulatory Committees. He always spoke his mind, never sat back and fell in with the crowd but was also prepared to listen. Often he proposed an alternative recommendation which sometimes was not supported but was always respected by his colleagues. A particular passion was the fight against rural crime and any officer coming to committee from whatever organisation better watch out because Glanmor was passionate about putting the interests of his constituents first.

What I will remember most were the private conversations we had where he talked about his love for his wife and family. He told me more than once that marriage was the greatest partnership there was.

He was also a great one for sayings, often very succinctly summing up a situation. This one I will remember for a long time and it is so true…..’Never boil your cabbages twice!’. It always did and always will make me smile. Rest in peace dear dear Glanmor.