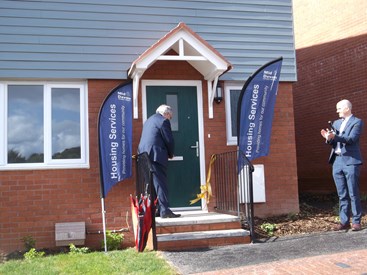 Mid Devon District Council has marked the completion of its latest new social housing units by holding an opening ceremony at its new development in Turner Rise.

The development is on the site of a disused garage area and has been linked to the existing Palmerston Park homes through new pedestrian routes and landscaping. The homes all have dedicated cycle storage areas and have been built in a staggered way across the site way to ensure the buildings blend in with the steep topography of the area, without creating a dominant effect on the skyline.

All the new homes have now been allocated with the tenants moving in early October 2019.

The development was a joint-funded project between the Council and Homes England, and has helped towards meeting the current housing need identified in the town. The Council’s Corporate Property and Asset Team with employer’s agent Faithful & Gould, were the Client for the development and Enelco (trading as EBC) were the Principal contractor delivering this design and build project.

“It is great to step inside these new homes, and meet some of the people who we hope will enjoy living in them, at the same time we celebrate 100 years of social housing. The housing styles may have changed throughout the years but the need for such homes continues and we are proud to be able to offer high quality houses for those who need them.”

“Today’s event is not only great news for the new residents, but a welcome demonstration of the fact that, 100 years on from the introduction of the Addison Act, Mid Devon District Council is continuing to prioritise the provision of high quality council housing for its residents. I would like to thank my officers for working so hard to deliver this fantastic development, and to Homes England for their support and partnership.”

The event was also a chance for new residents to meet their neighbours over coffee and cake as well as an opportunity to meet their Neighbourhood Officer and representatives of the Tenants Together resident group.

The opening of Turner Rise is the latest social housing development the Council has completed and has taken place in the centenary year of social housing, with 2019 marking 100 years since the introduction of the Addison Act.

This project follows the completion of several previous housing schemes also in partnership with Homes England, to include: 22 units at Joseph Locke Way in Crediton, 6 units at Fir Close in Willand and 14 units at St. Andrew Street in Tiverton and 4 units at Birchen Lane, Tiverton.