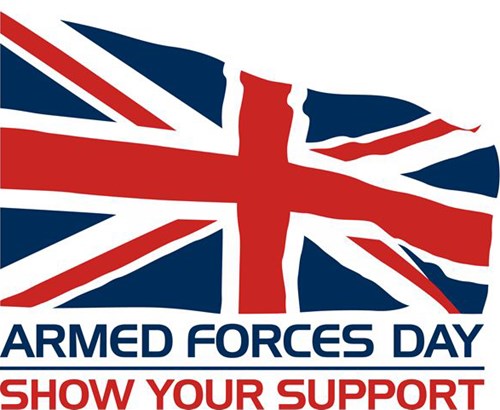 The Armed Forces Day flag will be raised on Monday 22 June in front of Phoenix House, Tiverton, in unison with more than 450 local councils.

The raising of the flag marks the commencement of many virtual events leading to Armed Forces Day on Saturday, 27 June and serves to demonstrate the community’s respect and gratitude for members of the Armed Forces and their families, veterans, reservists and cadets.

In previous years, before COVID-19 struck, a ceremony would have been led by the Chairman of the District Council and attended by elected members, officers and civic dignitaries.

Despite there being no ceremony this year, the Current Chairman of Mid Devon District Council, Cllr Les Cruwys, was keen that the opportunity to honour our Armed Forces did not go un-missed this year despite the restrictions on social gatherings and drew on personal connections to the armed forces to express his appreciation to a new generation joining the services.

“My own grandparents had seven sons and of the six that reached adulthood, all became members of the varied Armed Forces: Navy, Air Force and Army. At one time, four of their sons were held as prisoners of war and a fifth survived Dunkirk. What they must have gone through over those years I cannot imagine.

“Today is not about celebrating the life of any one hero, but about recognising all who have served, past, present and future. To see so many young people joining cadets and youth groups is reassuring for us old ones to know that we have young people in our midst that are willing to take on danger and oppression to keep us safe.”

“This is our chance to show support for the men and women who make up the Armed Forces community: from currently serving troops to service families, veterans and cadets”.

The flag will be flown throughout the week leading to the National Day of celebration on 27 June.