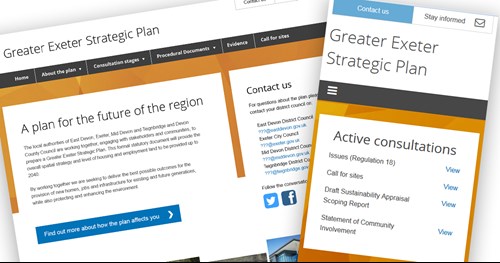 Mid Devon, Exeter, East Devon and Teignbridge Councils are all considering whether to begin the next round of consultation on their Greater Exeter Strategic Plan (GESP).

The GESP proposals include draft planning policies and large scale development options across all four council areas for the next twenty years, up to 2040. It will tackle big planning issues affecting the Greater Exeter area, of which Mid Devon is part of, including climate change, meeting the need for new homes, jobs and infrastructure, transport and wildlife protection. The GESP will also identify possible development sites across the area, including large regeneration sites in Exeter.

The meetings will ask Councillors to agree the ‘draft policies and site options’ document and a public consultation to begin in September. Exeter City Council will be first to decide at their Executive meeting on 7 July, followed by Teignbridge on 21 July, Mid Devon on 6 August and East Devon on 18 August.

The Councils have been asked to carry out the consultation (which was originally planned in for June) from September, following Government advice that planning authorities should continue despite Covid-19. The consultation will ask for the public to have their say on the draft policies and site options, which will influence the next stage.

“The Greater Exeter Strategic Plan draft policies and site options are due to be considered at a meeting of Mid Devon District Council’s Cabinet on the 6th of August 2020. If accepted for consultation by all four Councils that have been undertaking the joint planning work, the public consultation due to commence in September will be an important opportunity to feed views into the emerging plan."

Further information about Greater Exeter Strategic Plan is available on the GESP website.