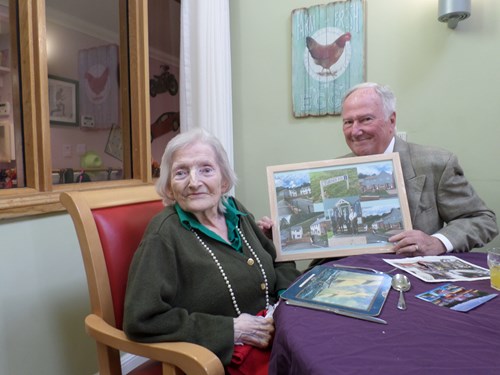 A former councillor who spent half a century representing her ward members has been honoured by Mid Devon District Council.

Mary Turner sat on Tiverton Town Council, alongside her husband Ron, and Mid Devon District Council for many years. Her dedication to her ward has now been recognised with the naming of a new street after her.

Following the completion of 26 social housing homes by Mid Devon District Council, situated in Palmerston Park, Tiverton the new road through the development has been officially named Turner Rise.

After the official opening ceremony at Turner Rise, Alderman Mary Turner was presented with a photo montage of the new development by current Leader of the Council, Bob Deed.

“Mary is an extremely well known and much loved former resident of Tiverton who served for some 50 years as a Tiverton town councillor and some 40 years as a Mid Devon district councillor. I recently visited Mary at her residential home in Somerset and presented her with the montage.  Despite failing health she was delighted with the honour and the day seemed to bring back many happy memories of her time on the Council.”

“The new homes in Turner Rise are a testament to the District Council’s hard work and dedication to supporting our local communities and this is something Mary was well known for. It is fitting that the road will forever be named after her. “

Members of Tiverton Town Football Club received a similar honour in the nineties with the naming of three streets - Rogers Close, Everett Place and Varley Court after their FA Vase triumph in the 97/98 season. But rules were later changed and street naming was only allowed for those who were deceased. However, following a motion put to the Council in July 2019 the rules were amended and now in exceptional circumstances a street can be named after a living person who has made an outstanding contribution to the area or its people, just as Mary has.