Father and Son to Work Together at Polls 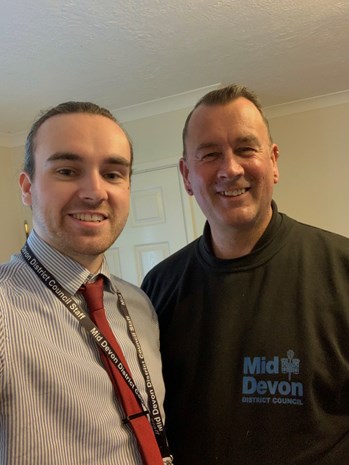 Voters in Culmstock will be welcomed today by father and son duo, Paul and Chad Kirby

Paul started poll work as part of the European Elections in 2014 and has taken part in every election in Mid Devon since. It’ll be his fourth time working as a Presiding Officer but his first working at an election with his son.

Chad, his son, has taken part in various roles as part of elections but has never worked at a Polling Station. He worked as a Count Assistant in the Police & Crime Commissioners elections in 2016 and as a receptionist the following year.

Both Paul and Chad are staff at Mid Devon District Council. They have worked as canvassers before - asking residents to register on to the electoral roll. They made this into a friendly competition to see who could register the most people in their respective areas, on both occasions Chad won.

The pair will join Cullompton resident Lynne Elston who is working as a poll clerk for the first time.

This year’s elections will be different to previous years given the COVID pandemic and the measures put in place to keep Mid Devon residents safe whilst voting. Being in the same family bubble has made it easier for the Elections team to organise polling duty.

We have a wide range of people working at this year’s elections from around the district and from all different backgrounds.

“I’ve worked with numerous people during my time working on elections, it should make for an interesting dynamic working with Chad but a fun one. I look forward to welcoming Culmstock residents when they come to vote. It’s a new polling station for me so it’ll be great to see some new faces.”

“Working with a familiar face should make for an enjoyable day and more comfortable first polling experience. I’m looking forward to it, although if you ask me again after today the response may be slightly different as 16 hours working with my Dad may have taken its toll.”

“We previously had a mother and daughter duo for the elections in 2019 but now it’s good to have the men team up to work on Election Day.”