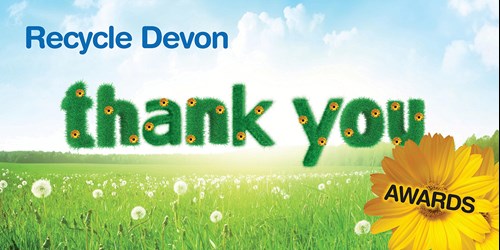 The Thank You Awards are organised by Devon County Council’s Recycle Devon team and was first launched to recognise those who go above and beyond to ensure Devon remains clean and green.

Nominations for eight different awards categories, including those for schools, businesses, and community groups, were submitted via the Recycle Devon website between 17 October and 29 November 2019. Seven Mid Devon residents have been shortlisted for this year’s awards, as follows:

Mike operates a community waste scheme for plastics, which cannot be recycled at the kerbside. He has setup bins at the Guildhall in Bradninch for the collection of plastic film waste, to include crisp packets and confectionery wrappers, which he then packages and sends to TerraCycle® for recycling. He has done this for many years and raised lots of money for local charities including the Bradninch Pre-School, Scout Group, Football Club and Youth Club. He is a prominent member of the community and for over 10 years, he has organised many community events for his town.

Denise setup a stall at the Tiverton Pannier Market in October 2017 to help support people move towards living a zero-waste lifestyle. She went out of her way to make ethical products more available to the residents of Mid Devon, including toilet paper and ethical milk with reusable bottles. She also provided a collection point for Ellie’s Fund.

Lisa has worked tirelessly to implement a new recycling and composting strategy at Uffculme School. She has made positive changes, inspiring an excellent team to carry out collections and sorting on site. She has made a real difference and is passionate about her role.

Jack (aged 15) and David (aged 14), (nominated separately), have built a ‘can cart’ and travel around their village collecting recyclables, which is sold to specific businesses. They donate the money they raise to a bell restoration appeal fund at St Peters Church.

Sarah is incredibly environmentally conscious and recently setup a recycling point in Blackborough for items, which are currently not accepted at the kerbside. Sarah has placed a series of boxes, all individually labelled, in the porch of the village hall for the convenience of residents to deposit items of waste such as crisp and nut packets, biscuit wrappers, bread bags, contact lens packaging, toothpaste tubes, toothbrushes and lots more. 50Kgs of waste has been collected since May 2019, which has raised money for a junior diabetes charity. She also setup the Blackborough Green Community Facebook Group and organised various green initiatives for the village involving the procurement of recycled children's lunchboxes and brown paper tape, as an alternative to Sellotape for residents when wrapping their Christmas presents.

Elle began collecting hard-to-recycle waste as part of a group fundraising initiative and to inspire her local community in Blackborough. She setup a collection point where she works and within six months, accumulated 700Kgs of waste for recycling with TerraCycle®, that would have otherwise ended up in general waste. She also setup a Facebook group to support her recycling initiative and to share recycling advice more widely with her community, which has nearly 400 members.

“We’re very lucky to have residents within Mid Devon who go that extra mile, from organising local drop off points for TerraCycle®, to groups or individuals that organise litter picks across our district.

“We also have a great team of Recycling Collectors at the Council who service the needs of our residents every day and go above the call of duty to carry out their daily tasks to the highest standards.

“We wish our nominated residents every success at the awards ceremony on Friday, 6th March”.

The categories for this year’s awards are:

To find out more about the Recycle Devon partnership: