Published on behalf of the Local Government Boundary Commission for England 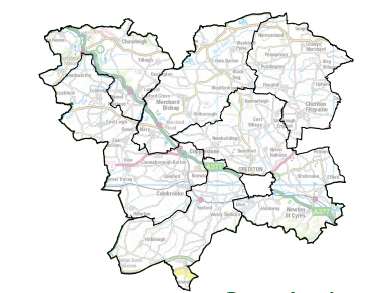 New boundaries are being proposed for council wards in the rural west of Mid Devon. The Local Government Boundary Commission for England wants to hear what residents and local organisations think about the proposals.

The Commission is satisfied that it has received sufficient evidence in earlier rounds of consultation to finalise new ward boundaries for the rest of Mid Devon. A six-week consultation on the proposals will run until 09 November 2020.

A full set of final recommendations for the council will be published in January 2021.

The Commission is the independent body that draws these boundaries. It is reviewing Mid Devon to make sure councillors will represent about the same number of electors, and that ward arrangements will help the council work effectively.

The Commission has published proposals for changes to the rural west of Mid Devon District Council. It is proposing that there should be four single-councillor wards and two two-councillor wards. All of these wards have different boundaries to those proposed as part of the draft recommendations.

• Creating a Newbrooke and Sandford ward based on submissions received from two of the constituent parish councils.

“We are publishing further recommendations for a new pattern of wards in the rural west of Mid Devon and we are keen to hear what local people think of the recommendations. We want people in Mid Devon to help us. We have drawn up further proposals for new wards in the rural west of Mid Devon. We want to make sure these new electoral arrangements reflect communities. We also want them to be easy to understand and convenient for local people. Residents and local organisations can help us do that. We would like them to let us know whether they agree with our proposals before we take final decisions. It’s easy to get involved. Go to our website. Or you can e-mail or write to us. Just tell us what you think and give us some details why you think that. It’s really simple, so do get involved.”

The Commission has a dedicated section on its website where people can see the detail of the proposals and comment on the names of wards, their boundaries and the number of councillors per ward: https://consultation.lgbce.org.uk/node/18162

People can also give their views by e-mail at reviews@lgbce.org.uk, and by post:

The Local Government Boundary Commission for England is an independent body accountable to Parliament. It recommends fair electoral and boundary arrangements for local authorities in England. In doing so, it aims to:

• Make sure that, within an authority, each councillor represents a similar number of electors

• Create boundaries that are appropriate, and reflect community ties and identities