Last chance to have a say on the Devon Carbon Plan: 'Have we got it right?'

Devon residents have one final chance to give their views on the Devon Carbon Plan before its publication this summer. 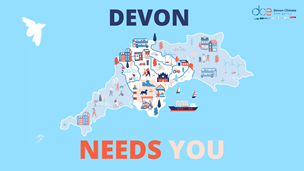 A final consultation launches on Thursday March 17 and it focuses on three vital areas: buildings and transport, which account for 70 per cent of Devon’s carbon emissions, and onshore wind.

The carbon plan has been created by Devon Climate Emergency, a partnership of businesses, public bodies, and voluntary groups, and is the county’s road map to net-zero.

It represents our best chance to ensure that Devon becomes a net-zero county by 2050 at the latest.

The plan consolidates the latest scientific evidence and, through previous consultations and last summer’s climate assembly, contributions from the public.

While some of the resolutions from the Assembly have already been addressed by the Interim Devon Carbon Plan, the Assembly’s task was to focus on the contentious areas of transport, buildings, and energy.

They drew up resolutions to expand Devon’s onshore wind capacity, to upgrade or ‘retrofit’ homes and buildings so they use and waste less energy, and the decarbonisation of on-road transport.

Since then, the Devon Climate Emergency partnership has been working together to transform these resolutions into deliverable actions.

Now, the consultation asks the public: “Have we responded fairly and correctly to the Assembly’s recommendations?”

This consultation is your chance to help ensure that the final Devon Carbon Plan is democratic, and fairly represents the wishes of Devon’s residents.

Dr Phil Norrey, Chairman of the Devon Climate Emergency Response Group, said: “The decarbonisation of transport, transitioning away from fossil fuels, and improving the energy efficiency of Devon’s buildings will be essential if Devon is going to reach the 2050 target. However, it is also critical that the transition to a low-carbon economy is fair, and that no area of society is unfairly disadvantaged. The Devon Climate Assembly emphasised the need for solutions that are right for Devon and prioritised the unique circumstances and challenges of Devon’s communities. This consultation will help to ensure that the transition to a low-carbon economy is just, fair and right for our county.”

Professor Patrick Devine Wright, University of Exeter, Chairman of the Net-Zero task Force, said: “Devon has led the way in citizen participation. Last year’s Climate Assembly provided an opportunity for a representative group of people from across the county to discuss and debate three key areas of the carbon plan. The recommendations from the assembly were clear. Now is the time to make sure that the Climate Assembly has impact - to turn its recommendations into specific policies and actions and to ensure that those actions are strong enough to have real impacts on climate change. This consultation will ensure public scrutiny and transparency, and in so doing, strengthen the final Carbon Plan published in the summer.”

Respond to the questionnaire.

You can also take part by visiting your local public library, where you can find copies of the consultation text and questionnaire.

If you’d like to fill out the questionnaire at home, you can order a free copy by emailing environmentalpolicy@devon.gov.uk or by phoning 03451551015.