An order on a premises in Bampton Street, Tiverton was granted on Thursday 28 July, by North and East Devon Magistrates' Court under Section 80 of the Anti-Social Behaviour, Crime and Disorder Act 2014. 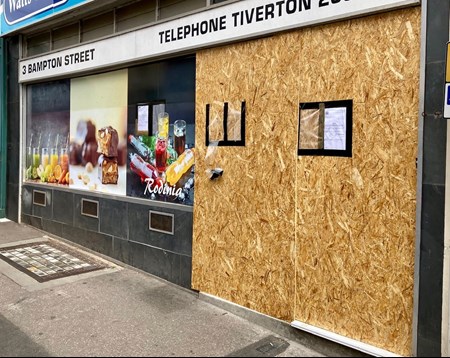 The Heart of the South West Trading Standards Service and Devon & Cornwall Police gained intelligence suggesting the premises was involved in selling illegal tobacco products in 2021. They subsequently conducted a number of test purchases and executed search warrants finding more than 3,000 packets of cigarettes and more than 800 pouches of hand rolling tobacco – some of which were counterfeit tobacco products – totalling in excess of 40kg.

Mid Devon District Council was approached by Heart of the South West Trading Standards Service to assist by applying for a closure order. The process began on 22 July, after a search warrant was executed and the premises was served a closure notice on 26 July which closed it down for 48 hours.

a) That a person had engaged, or (if the order was not made) was likely to engage, in disorderly, offensive or criminal behaviour on the premises, and that the order was necessary to prevent the behaviour, nuisance or disorder from continuing, recurring or occurring.

“It was important to shut the property down given the negative impact on the community and the criminal behaviour. The success in obtaining the closure order demonstrates the effectiveness of joint working to deal with ‘problem premises’.

“It’s taken our legal team less than a month to get the closure order from when they were contacted by Trading Standards. An impressive turnaround given this was the first commercial premises the Council has sought a closure order for.”

“We will continue to work closely with Mid Devon District Council, Devon and Somerset’s other authorities and the police to stop the sale of illegal tobacco.

“This sends a clear message to retailers. If you sell illegal tobacco, there will be consequences for you and your business, and your livelihood will be impacted.

“The sale of illegal tobacco is not a victimless crime – the availability of cheap, illegal tobacco at pocket money prices encourages children to start smoking and puts them at risk and it harms the majority of retailers who play by the rules.

“We now use detection dogs so regardless of how well it’s hidden, our dogs will be able to find even the smallest amounts.”