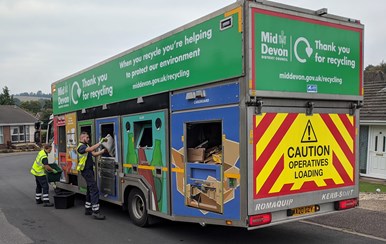 An innovative scheme which has allowed Devon’s district councils to improve their kerbside waste collection services and improve recycling rates has won a national award.

The scheme has led to savings of £6.8m in treatment costs for the County Council, and half of this extra money has been shared back with the five District Councils which has enabled them to improve their waste collection services.

It has also increased recycling rates for those authorities and improved recycling collection services for over 250,000 Devon households.

The Scheme has allowed the five authorities to change their kerbside collections knowing that savings that they generate in cheaper treatment costs or a reduction in waste volumes will be shared back with them to fund further initiatives and improvements.

‘I'm delighted that our local councils have been recognised nationally for their great work. This is such good news for Devon and the teams involved. We've all worked together to deliver an innovative scheme that not only has helped to increase efficiency but we've improved recycling rates over the county and reduced costs. Congratulations to everyone involved.’

Average recycling levels within the five District Council areas have improved overall from 47.9% to 55.2% with a reduction in waste volumes of 25kg/head (6%).