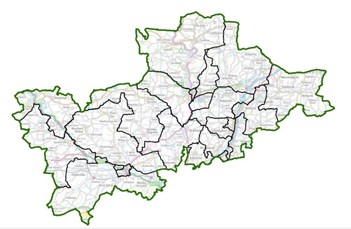 Mid Devon is set to have new boundaries for its council wards.

The Local Government Boundary Commission is the independent body that draws these boundaries. It has reviewed Mid Devon to make sure councillors will represent about the same number of electors, and that ward arrangements will help the council work effectively.

The Commission has published final recommendations for changes in Mid Devon. It says residents should be represented by 42 councillors. This is the same as current arrangements. There will be 22 wards: five three-councillor wards, ten two-councillor wards and seven single-councillor wards. All wards will change, except Silverton and Upper Culm.

“We are very grateful to people in Mid Devon. We looked at all the views they gave us. They helped us improve our earlier proposals.We believe the new arrangements will guarantee electoral fairness while maintaining local ties.”

People and organisations made 124 comments to help decide the new wards.
Changes in response to what local people said include:

The Commission has made further changes to its earlier proposals. Details can be found on its website. Parliament now needs to agree the changes. The new arrangements will then applyfor the 2023 council elections.

An interactive map is available

The Local Government Boundary Commission for England is an independent body accountable to Parliament. It recommends fair electoral and boundary arrangements for local authorities in England. In doing so, it aims to:
• Make sure that, within an authority, each councillor represents a similar
number of electors
• Create boundaries that are appropriate, and reflect community ties and
identities
• Deliver reviews informed by local needs, views and circumstances