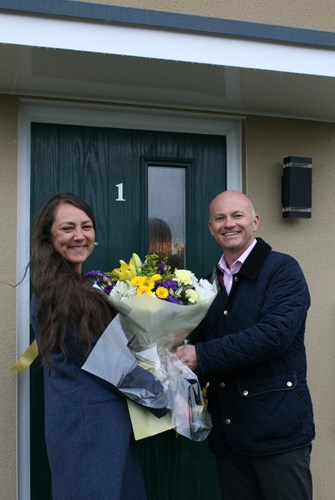 Mid Devon District Council has marked the completion of its latest new social housing units by holding an opening ceremony with one of its new tenants.

The six new properties, which consist of four, two bedroom houses and two, three bedroom houses, have recently been completed with the new tenants moving in during April.

The development was a joint-funded project between Homes England and the Council’s Corporate Property and Commercial Assets team, aimed to help towards meeting the current housing need identified in the town. The Council awarded the development contract to 3 Rivers Developments Limited with principal contractor Enelco Building Company Limited to build the homes and complete the project.

The opening ceremony took place on Wednesday 24 April 2019 and to mark the occasion new tenant, Nicole Pavanello cut a ribbon placed across the entrance of the units and was also presented with a bouquet of flowers by Andrew Pritchard – Director of Operations at Mid Devon District Council.

“I am so pleased to have been able to move into a brand new property and I am looking forward to spending many happy years here.” 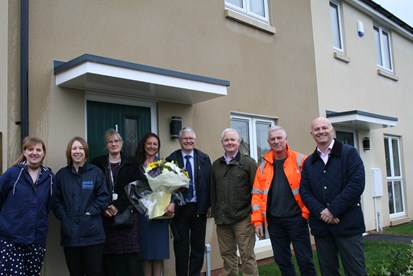 This project follows the completion of several previous housing schemes also in partnership with Homes England, to include: 22 units at Joseph Locke Way in Crediton, 6 units at Fir Close in Willand and 14 units at St. Andrew Street in Tiverton and 4 units at Birchen Lane, Tiverton. A further 26 units at Palmerston Park in Tiverton are due for completion in the summer of 2019.