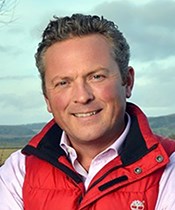 Jules is perhaps best known as the leading face on the BBC’s hit property series, 'Escape to the Country', which he joined in 2007. His passion for the countryside has also been taken up by the BBC’s flagship rural affairs show 'Countryfile'. His enthusiastic, adaptable and hands on approach allows him to cover a wide range of subjects from science and history to wildlife and current affairs. Jules’s interest in historic buildings and design underpins the BBC’s renovation series, 'Britain’s Empty Homes' which broadcast its second series in spring 2011, whilst his lifelong passion for military history came to the fore in BBC1′s more hit 'Dig 1940'. Commemorating the 70th anniversary of 1940, this three part series provided Jules with his first solo primetime break, and was a ratings winner.

Spring 2012 saw Jules team up with fellow Countryfile presenter John Craven as they embarked on an ambitious fifteen part series exploring the challenges facing our heritage, Britain’s Heritage Heroes, whilst listeners to Radio 4's Open Country can hear regular contributions from Jules as the latest member of this long running and popular countryside magazine show. Jules’s interest and expertise in military history also came to the fore in 'Celebrity Mastermind' in late 2011. Since then, Jules has gone on to present 'How we on the War', a ten part series for BBC 2, and more recently, 'Dive WW2; Battle of the Atlantic', a two part special for BBC Northern Ireland soon to be released to the BBC Network.

In addition to presenting and broadcasting, Jules is also an engaging writer, with regular contributions to Countryfile Magazine, and most recently Homes and Gardens. Readers can also now read Jules monthly columns in Welsh Border Life, covering a range of topics from this leading title from a part of the world he’s long called home. Jules began his professional life as a Field Archaeologist, and has travelled and worked in some of the most demanding countries across the world. His TV career began in 1996, working in production. Over the years that followed he worked behind the camera on a wide range of programming from C4′s 'Time Team', to BBC2's 'Horizon' and numerous military history series alongside Professor Richard Holmes. Jules developed and presented the living history series 'Revival' for ITV, which gained him an RTS nomination in 2005. The 'Peoples’ Museum', for BBC Daytime, gave him his first network break in 2006.

Jules’s experience and expertise across history, rural affairs and property, combined with his warm and engaging style have established him as a versatile and popular presenter. Having spent most of his life in the heart of the Cambrian Mountains in Mid-Wales, renovating his own ‘Escape to the Country’, he now lives in Herefordshire, once again passionately restoring a period gem. He loves to travel, to garden and to rescue old furniture.