Mid Devon’s push towards its carbon reduction target has received a boost with the installation of solar panels at its Carlu Close depot. 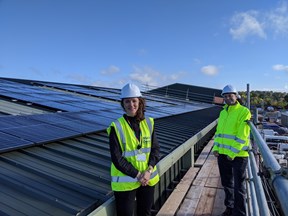 The Willand based depot, which is home to the Council’s Street Scene teams, now has panels covering 250m2 of its roof space, meaning the 147 panels can produce almost 50kW of energy per hour.

The panels were installed by Sun Gift Energy and are the result of a £32,000 investment by the Council.

The initial investment should be paid back in less than six years due to the electricity generated to power the site, meaning less reliance on the National Grid as an energy source, and the ability for the Council to sell back some of the unused power.

In addition the Council predicts that in about 20 years the organisation will have saved in the region of £140,000 by sourcing its own energy for the depot and will also gain about £30,000 in the form of income from the National Grid.

“I’m pleased that we made the decision to install a larger array of solar panels on our recycling centre than originally planned. I’m also pleased that we chose to support the regional economy by choosing an ethical, Exeter-based company to provide and install the panels. Not only will these new panels save the Council money on energy bills, but they will help us meet our aim of becoming a carbon neutral authority. Decisions like this therefore benefit us in the short term, as well as future generations, too. The panels are one of a list of actions we have planned as part of our new climate strategy and action plan, which will be updated and reported on regularly.”

The Council recently produced a Climate Strategy Action Plan and is collaborating with partners to produce a county-wide carbon plan, as well as looking at realistic and tangible ways it can reduce its own carbon impact as well as supporting residents and businesses in Mid Devon to do the same.

To find out more visit: