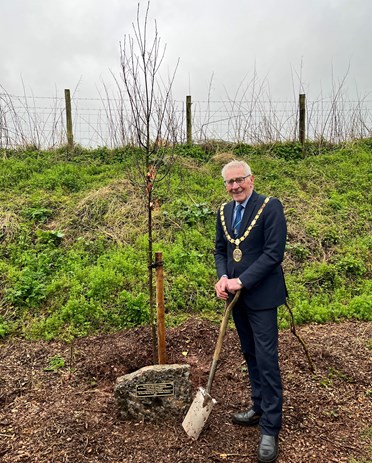 On Sunday 6th February 2022, Her Majesty the Queen became the first British Monarch to celebrate a Platinum Jubilee, marking 70 years of service to the people of the United Kingdom, the Realms and the Commonwealth.

To mark this unprecedented anniversary the Chairman of the Council, Councillor Ray Radford joined with civic leaders across the UK on Friday 11th March to plant an oak tree as part of a wider initiative for The Queen’s Green Canopy project. The tree was planted at a location beside the Grand Western Canal east of Rock Bridge, near Halberton. A plaque was also put in place next to the tree to commemorate the occasion.

“I am delighted on behalf of Mid Devon District Council to be planting this tree today in conjunction with hundreds of Civic colleagues across the nation in order to commemorate such a historic event in her Majesty’s reign. I am also delighted, as Chairman of the Grand Western Canal Joint Advisory Committee, to be planting the tree in such a beautiful spot alongside the canal.”

Those in attendance included the Council’s Tree Officer, Chairman, and Cabinet Member for the Environment & Climate Change, as well as the Chairman of Halberton Parish Council and the Country Park Manager.

“We have been planting lots of trees recently and this will be a welcome addition to that effort as sadly we have had to fell a lot of ash trees along the canal due to Ash Dieback, including some quite close to this location."

If you would like the Chairman of the Council to attend any of your Jubilee events please contact his Secretary, Sarah Lees, via email: slees@middevon.gov.uk. 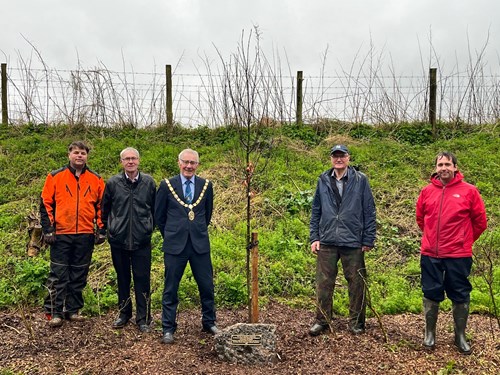 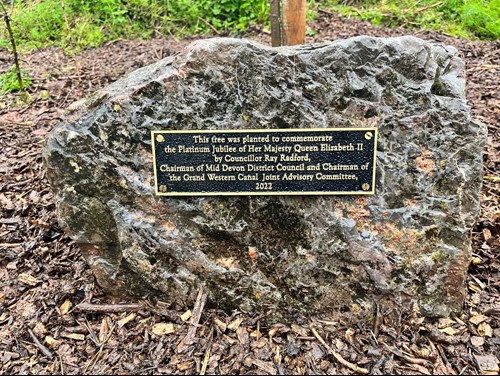 What to expect during the Queen’s Platinum Jubilee Weekend:

Over the four national Jubilee days Crediton will see many community events including the lighting of a fire beacon to join others being lit nationally, a special Town Band performance in the town square with a cream tea for people from local care homes, open-air flag-making workshops to help decorate the town and an exciting Saturday-long entertainment ‘Party in the Park’ followed by a free open-air big screen evening movie.

Sunday, June 5th, St. Boniface Day will see the transformation of a fir tree into a Christmas tree in the town square. The event will mark the legend of Crediton being the birthplace of the Christmas tree with scores of children and parents invited to decorate the tree with hundreds of painted pine cones and glitter. They will then join hundreds of other events up and down the country with “The BIG National Sunday Lunch”. The square will be filled with additional tables and chairs, food will be on sale from street traders as well as perimeter traders, or people can also simply bring their own food to share. There will be a programme of live music and singing, a big Tug of War competition between teams from the town and from the Crediton Hamlets and a fancy dress competition to come dressed as a favourite Queen or King.

The many different events are organised by a team from Crediton Town Council, the Crediton Town Team and the Crediton Arts Centre. The events are being supported with grants from Mid Devon District Council's Love Your Town Centre fund, Devon County Council's Locality Fund, and the Town Council itself, with many groups and people giving their time voluntarily to create the events.

Anyone interested in attending the Jubilee and Devon Day Celebrations are advised to keep their eye on the Facebook Page ‘Crediton In & Around’ where updates and details of all the events will soon be announced.

The Cullompton Town Team are working in partnership with the CCA Committee to prepare events within the town centre and at the CCA fields for Sunday, 5th June to mark the Queen’s Jubilee.

A sneak peek of the proposed plans includes a procession through the town, a 5 hour Lego building ‘Legothon’, a history of Cullompton exhibition and a whole host of entertainment and games at the CCA Fields. Stay posted on Cullompton Town Team’s website for when the full details are announced.

The town council has created a working party with the town centre partnership and Tiverton Rotary to plan jubilee events for the weekend. Keep an eye on the Tiverton Town Council Facebook page for when details are announced.

The Tiverton Pannier Market will be holding two events over the bank holiday weekend – both featuring lots of stalls, street food, live music and entertainment.

There will be a community celebration event on Friday 3rd June, featuring live music from local folk trio Fox Willow.

These will launch the Tiverton Jubilee Festival, which will feature community events on all 12 market days throughout June, including a showcase of local schools, charities, community groups, sports clubs and villages.

Outside of Mid Devon:

Sandringham and Balmoral will also be open for residents and visitors to enjoy the celebrations across the long weekend. For more information visit the Royal Family website.