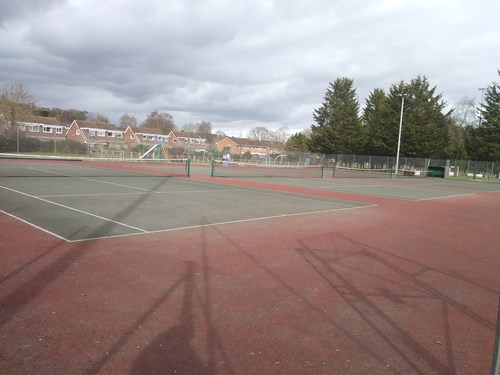 Improvement work to enhance the existing tennis courts at Lords Meadow in Crediton is due to take place next month.

The Council is investing in the region of £10,000 to improve access to the courts for other sports and will be using the money to revamp the courts, making them multi-purpose for the use of netball as well as tennis.

While the work is taking place the four courts will be closed for approximately two weeks from 3 June 2019.

The relining and painting of the courts will enable both netball and tennis players to use the courts, which in turn will free up space on the adjacent artificial turf pitches enabling more football sessions to take place. It also means the popular netball club will have a hard court facility for the first time in a number of years.

Mid Devon District Council has been working with local sports clubs and organisations which use the courts to ensure the disruption is kept to a minimum and that the work is beneficial to everyone involved.

“For many years the tennis courts have been under used and with high upkeep costs maintaining them for a single sport is just not financially viable. After consulting with those involved we decided to turn the courts into a facility that can be enjoyed by players of both sports and we hope this work will ensure club members and members of the public who wish to book the courts or artificial turf pitches now have a surface fit for purpose.”

“We are very excited at the prospect of freshly painted and newly marked courts at Lords Meadow. With a mixed team about to embark on their summer season in the East Devon League and (for the first time in several seasons) a men’s team in the Exeter and District Summer League, we are very much looking forward to the improved facilities.”

“We want to thank the council for letting us know about these plans which are incredibly exciting for us, and will hopefully provide an opportunity for our league to grow in future. It also means we will be able to revert back to two match times, as opposed to four which we only introduced to avoid clashing with the football bookings either side of us on each court.”

The scheduled work is weather dependent but users of the courts will be kept informed via Mid Devon Leisure’s Facebook and Instagram pages and directly through the clubs.