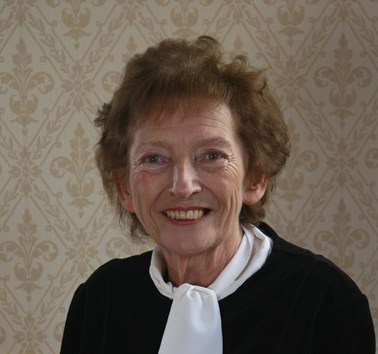 Mary Elizabeth Turner was born in Westminster, London. She was evacuated to Devon as a child during the Second World War and when her father came down to visit the county he loved it so much he decided to move the whole family down.

Mary first became involved with local government in the 1960’s as a young housewife, married to Ronald and with 3 young children. Mary first stood for what was then known as Tiverton Borough Council in 1966 and her involvement with the flood scheme was considered one of  her greatest achievements as a councillor, alongside her work to establish a museum for Mid Devon and the creation of a thriving community centre at the former Heathcoat’s School. Through her role with both Mid Devon and Devon County councils, she fought to restore the disused Grand Western Canal which is now a thriving country park enjoyed by many.

As a councillor, Mary spent half a century representing her ward members, sitting on Tiverton Town Council, alongside her husband Ron, as well as Mid Devon District Council (MDDC) and Devon County Council. She was known as a dedicated councillor with a wealth of experience.

Mary served as an MDDC elected member from June 1973 to May 2015 and was the Council’s Chairman from May 1993 to May 1995. She also held the position of Vice Chairman of the Council from May 1992 to May 1993, Vice Chairman of the Resources Scrutiny Committee from May 2002 to May 2005 and was a longstanding member of both the Policy and Development Committee and the Scrutiny Committee. She was also one of the first female Mayors of Tiverton, as part of the town council. As a county councillor she served from 1977 to 2009.

Back in October Mary’s contribution to local politics was recognised by MDDC when a new street was named after her, Turner Rise in Tiverton.

“Mary was very well known for her support and dedication to her community. She was very active with councils at all different levels, for a considerable period of time, and this was reflected in the numerous roles she held at Mid Devon and the support she had from her ward. Her commitment to her community and her passion to improve the area she represented was second to none. She will be greatly missed by all those who knew her.”

If you would like to leave a message of condolence for Mary, please use our online form: