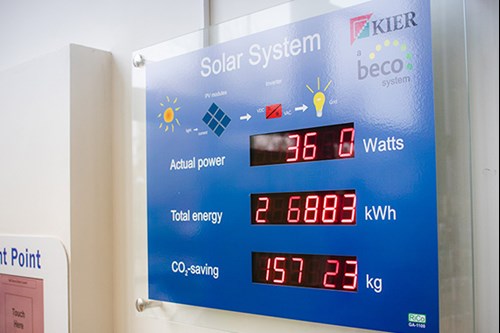 Back in 2012, Mid Devon District Council embarked on a long term energy saving project that would help reduce the Council’s energy consumption and save money.

Now half way through the project the Council, in partnership with Anesco Energy Services, is reaping the rewards and figures show the success of the project so far.

Under the terms of the 12 year agreement, Anesco carried out an initial energy saving audit before installing a range of new equipment on council owned property, including the three leisure centres as well as the multi storey car park in Tiverton.

The firm identified and implemented the following energy saving measures:

Now the work has been carried out the Council is reaping the rewards, saving a third on its annual energy expenditure (approx. £95,000).

The funding arrangement for the project also meant the Council had no upfront costs to pay, yet benefitted from the replacement of ageing equipment which was paid for by Anesco. In return the energy saving firm benefits by receiving 85% of the savings, with the Council taking the remaining 15%.

“This funding model was innovative and sustainable and enabled the Council to improve our energy efficiency while saving money year-on-year with no upfront costs. By working with Anesco we were able to improve our equipment, reduce our carbon emissions and cut our energy bills. We are half way through this project and are now looking at ways we can save even more energy for the benefit of our customers and this includes our continued monitoring of our current contractual terms.”

But it’s not just the partnership with Anesco that has seen the Council improve its green credentials.

By 2018, each of the Council’s leisure centres have had two rapid electric charging points installed as part of an agreement with InstaVolt. The pay-as-you-go charging points can be used by both commercial and domestic vehicles and are linked to the popular electric vehicle website zap-map.com. In addition to the benefits to the environment, the council receives an income from InstaVolt for the next 30 years. Since their installation, they have been used almost 3000 times and saved more than 12,000 litres of fuel. The Tiverton chargers were even featured in a recent Top Gear magazine article on electric vehicles!

In 2011/12, the Council installed solar PV panels on 1,176 Council house properties; the Council also installed 236 Air Source Heat Pumps and 71 Solar Thermal installations. This technology reduced energy bills for tenants with any surplus being fed back into the electricity grid.

Solar PV panels have also been installed on the roofs of the Council’s main offices at Phoenix House, Tiverton and its leisure/sports centres at Exe Valley, Tiverton; Culm Valley, Cullompton and Lords Meadow, Crediton. A total of 278.32 kWp (kilowatt peak) of electricity will be produced which in turn saves 150 carbon tonnes per annum, thereby reducing the organisation’s baseline budget for electricity by circa £60k per annum.

This continued work to improve the Council’s green credentials has recently been recognised in the form of a commendation being awarded at the South West Energy Efficiency Awards 2019.

“We’re clear that we need and want to cut our own carbon emissions. We have ambitious targets and a clear plan how we will achieve this. Our aim is to reduce costs for ourselves, in return our tax payers but also improve the environment we are in. Receiving recognition of this work by our peers is an added bonus and gives us an incentive to push on with our future projects.”

“As you may have read, the Council has had the foresight to install a number of measures to assist in the fight for climate change. As a Local Authority we will continue to lead, in any way we can, to the Climate Change Emergency response, recently unanimously approved by all Mid Devon District Councillors.”

Individual home owners are also benefitting from energy saving council initiatives. Last year, 36 households switched their energy supplier to get cheaper tariffs through the Council’s switching scheme. In addition, 176 households benefitted from the government approved ECO Flex grant scheme to improve energy efficiency, while the Council also made 168 referrals to the LEAP scheme, resulting in the installation of around 860 small energy saving measures in resident’s homes.