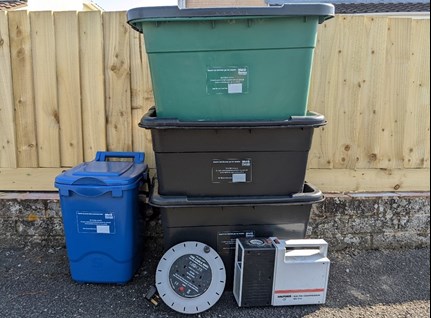 Since September 2020 householders in Mid Devon have recycled 38.3 tonnes of unwanted small electricals. However, the council is calling on more householders to recycle their electricals in a bid to reach 59 tonnes by September 2022. To reach this target the Council has teamed up with the not for profit Material Focus, to raise further awareness of this service as part of the national Recycle Your Electricals Campaign. Anything with a plug, battery, or cable can be re-used or recycled.

Mid Devon householders have been able to easily declutter their unwanted electricals via their kerbside collection service, whilst also helping the environment. So far the service has collected over 1kg per household, but with the average UK household binning 5.3kg of electricals every year, Mid Devon District Council is calling on even more households to recycle their electricals.

Research, by Material Focus, has found that UK householders are also hoarding 527 million small electrical items, an average of nearly 20 per household. And the problem is set to get worse as waste electricals are one of the fastest growing waste streams in the UK. Instead, the majority of electricals can either be re-used or the materials contained in them recycled by being turned into anything from life-saving equipment to children’s playgrounds.

“I am thrilled to see that the residents of Mid Devon have been making full use of the kerbside small electrical recycling service. I would like to thank all the residents that have been using this service as it has a positive impact on our environment as the precious materials used within these products can be reused in new products.”

“This project is vital to ensuring that we make good use of our old electricals. Whether they are re-used or recycled - these items contain valuable materials that will otherwise be lost forever.  Our research has shown that in the UK we are hoarding over 527 million small electrical items, an average of 20 per household, which is why we have launched the Recycle Your Electricals campaign.  We are delighted to be working with Mid Devon, who are one of a number of projects that we are funding in the UK. So whether you are at home or work, please hunt out your old electricals and prepare them for recycling. ”