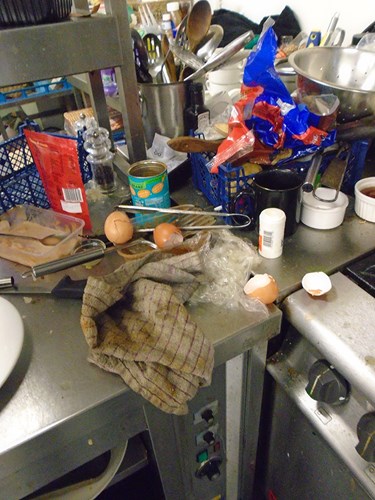 The White Hart at Cullompton, was convicted and sentenced last Thursday at Exeter Magistrates having pleaded guilty to six food hygiene offences.

Public Health Officers from Mid Devon District Council attended Exeter Magistrates on Thursday, 27 February 2020 to hear the sentencing of The White Hart At Cullompton Ltd, before District Judge Matson. The offences were:

“The Defendant pleaded guilty to the offences of breach of food regulations committed on 3 October 2018. The kitchen was found in a filthy condition, with mouldy, rotten and out of date food; food taken away for analysis showed E. coli present. The premises were visited again by Council officers on 11 July 2019 and it was found the kitchen had not improved.

“I have looked at the sentencing guidelines and assess the defendant company to be a micro business. I consider that the guidelines state £12,000 per offence. However, the guidelines state to take into account proportionality particularly actual turnover of the company and the net profit. I consider the fine should be £6,000 but will reduce this to £3,600 due to the guilty plea. I order the Defendant to pay the prosecution costs of £3,000. I also apply the victim surcharge giving a total £6,700.”

“We're committed to ensuring food standards remain high throughout Mid Devon to safeguard our residents and visitors, and we won't hesitate to utilise the full range of regulatory interventions available to us when tackling high-risk, illegal or poor performing food businesses.

“Given the severity of the conditions in this particular case, both our Public Health and Legal teams did an excellent job intervening and bringing about a closure, followed by a successful prosecution, thereby preventing any members of the public from becoming extremely ill, or worse still losing their lives.”

To find out more: