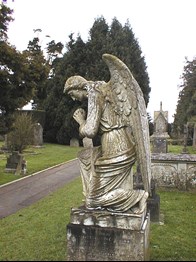 As the population exploded in the early Victorian period, Parish churchyards that had served their communities for a thousand years or more became overcrowded. In 1853 an Act of Parliament gave Local Authorities the right to set up municipal burial grounds. Tiverton opened their cemetery two years later in 1855. A commemorative stone at the entrance to the cemetery records this act. The gates to the original section are a listed monument. On the 5th of June in that year 5 year old Charles Harris, from the Union Workhouse (later the Belmont Hospital) was interred in grave Ai1, the first of eight interments that week. The cemetery was far busier in those days than it is now and there were no cremations in that era.

Initially the Cemetery was the exclusive resting place of the poor. The wealthy of Tiverton could still find their way into St. Peters, many having lavish family graves. It was not until December of 1855 that the first grave was purchased, when George Askew, a Tailor and Draper of Tiverton had a triple wide vault constructed for the princely sum of 3 Guineas. 85 interments had by then taken place in unpurchased graves.

The sale of private plots were very slow at first, only one each in 1856 and 1857, but by the 1860's graves were being purchased by some of Tiverton's wealthiest and most influential families. At this time some of the finest monuments in the cemetery started to appear. At least one of these is a listed monument.

By the mid 1880's, the original three acre site was filling up and an adjoining plot of the same size was purchased. It was laid out by W E Williams, a local surveyor and opened in 1895.

This 'new' extension lasted a little longer, and the move to the current 'new' cemetery did not take place until 1954. Many interments still take place in the Victorian Extension in old family graves, but mostly in the lower sections alongside the town leat which runs just outside the cemetery wall along the eastern edge. 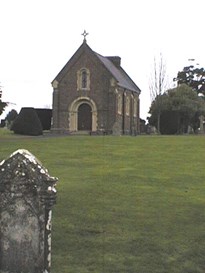 The Cemetery originally had two chapels; the one that remains was the Church of England chapel, another for non-conformists stood a hundred yards to the north. This was demolished in the late seventies, the remaining chapel becoming 'multi-purpose'.Very few, if any of the older graves are now visited apart from by the occasional family historian.. Some sections were cleared of headstones in the 1970's, many being placed around the walls of the cemetery, others laid down and the grass allowed to grow over them.

There are many interesting stories to be gleaned from the headstones in the cemetery. There are at least three of the original cemetery managers there, the founder of the Tiverton Gazette, Italian prisoners of war and many of the worthies of Tiverton from five generations.

There are two V.C.'s in the cemetery, more than in any other churchyard in Devon. Both with remarkable stories; Thomas Sage, a private in the Somerset Light Infantry who in Belgium, on 4th October 1917 "was in a shell hole with eight other men, one of whom was shot while in the act of throwing a bomb. The live bomb fell into the shell hole and Private Sage, with great courage and presence of mind, immediately threw himself upon it, thereby undoubtedly saving the lives of several of his comrades, though he himself sustained very serious wounds." Private Sage survived, returned to Tiverton and lived until 1945.

The second, brigadier Alfred Toye, won his medal in France in 1918, when he gathered a group of retreating men, turned them around and retook a bridgehead, saving the lives of thousands. He eventually died and was buried in 1955.

Both men attended a party at Buckingham Palace in 1920, hosted by the King.

The 'new' cemetery was opened in 1954 on former allotments. It was extended in the 1980's to the east and at the time of writing is being extended north into the last of the allotments. The last extension to the cemetery will be open in 2013. There is no more available land adjacent to the site so when this extension fills up in 40 years or so, either a new site will have to be found or the old ground will have to be reused. The government are considering changing the law to allow grave reuse because of the demand for land nationally. 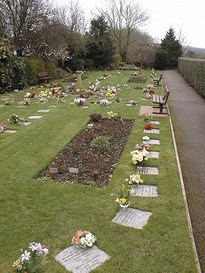 The 1954 extension to the cemetery contained a Garden of Remembrance for the interment of cremated remains. This proved so popular that another had to be opened in the mid 1990's.

In the next few years an environmental audit is to be carried out to see just what is there. There are many lichens that grow on the old stones, reflecting the clean air of the district. A pair of Green Woodpeckers have taken up residence in the last few years. As any visitor will notice, there is also a large rabbit population in the old cemetery, which causes quite a few problems by digging holes. An area of grass containing Cowslips is left unmowed every spring to allow the wildflowers to set seed.

At some point it is hoped to form a 'Friends of Tiverton Cemetery' group to help and guide the long-term development of the site as a historical, educational and environmental resource. Anyone interested in joining such a group can contact the office at any time.

Visitors should take care in all parts of the cemetery. Old monuments, although regularly inspected, can become dangerous, and it is very easy to trip over the monuments and the numerous rabbit holes.

Tiverton Cemetery is probably the towns best kept secret. An oasis of quiet in a rapidly expanding area of town. A peaceful garden for the remembrance of times and people gone, exactly what our Victorian forefathers envisaged nearly 150 years ago.

Please see Tiverton Cemetery Plan of the cemetery and Fees and charges.

For any enquiries about Tiverton Cemetery please Contact us.