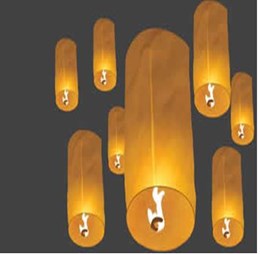 The use of sky, or Chinese, lanterns is growing in popularity and they are often seen in the night sky at festivals, weddings and other celebrations.

Like many other local authorities across the country, Mid Devon District Council does not recommend their use because of the fire hazards and risks they pose to property, crops, livestock and the environment.

To demonstrate our commitment to raising awareness of the hazards caused by sky lanterns, the Council resolved on 29 April 2015, to ban the release of sky lanterns from Mid Devon District Council owned property. We will also provide advice and guidance to organisers of events and use the Licensing regime to promote a voluntary ban on the use of lanterns.

The Devon and Somerset Fire and Rescue Authority also does not recommend their use and has produced some safety guidelines which should be carefully considered if you do intend to use lanterns.

The National Farmers Union has received numerous reports of harm to livestock, and in some instances death, caused by cattle ingesting the metal wires contained within the lantern frames. The danger and the repercussions of digestion are not realised until after the animal falls ill, usually ending in a slow and painful death unless destroyed by a vet. The small pieces of metal wire the lanterns are made of are not detectable by the metal detectors on the silage making machinery. The lanterns are often seen as a gentler alternative to fireworks, but the potential risks they carry are high and although they are not banned, there is already a complete ban on the lanterns in Germany and Australia.

If the lantern does start a fire there is the possibility that you could be held responsible.