How To Report Fly-Tipping 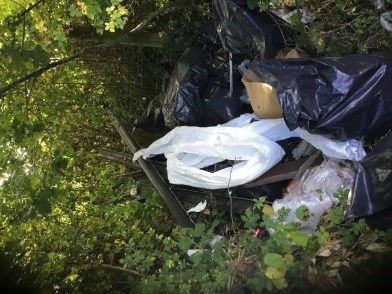 Since April of this year, 66 incidents of fly-tipping have been reported to the Council by diligent members of the public.

The quality of information provided in each case has helped to ensure the Council’s Street Scene team has reacted swiftly – from conducting initial investigations, through to the removal of the dumped waste – thereby preventing further accumulation and preserving Mid Devon’s scenic landscape.

Fly-tipping can be liquid or solid in nature and can vary in scale significantly, from a single bin bag of waste to large quantities of waste dumped from trucks. Fly-tipping is not only illegal, it poses a threat to humans and wildlife, damages our environment, and spoils our towns and countryside. More than one million incidents of fly-tipping were reported to UK Councils in 2016/17, costing £57.7 million of tax payers’ money to clean up.

There are multiple ways to dispose of waste lawfully. Private individuals can use:

Businesses can dispose of commercial waste by using:

To make a successful prosecution, the team needs sufficient information, combined with a willingness from any witnesses to provide a written statement in line with court proceedings. Anyone convicted for fly-tipping will face hefty fines, and/or prison sentences. The same penalties also apply to the person who produced the waste. Therefore, if you’ve hired the services of a private company to dispose of your waste, it’s imperative you check that the service provider holds a valid Waste Carrier’s Licence and you’re certain that the waste will be disposed of legally. Receipts and contact details of the company used should be retained.

Fly-tipping can be reported to the council via its Customer First team on 01884 255255, or online via the council’s website at middevon.gov.uk/ReportFlyTipping.

Do not try to rummage through the waste yourself to look for evidence as there may be hazardous or sharp items hidden in amongst it. The Street Scene team will carry out a thorough examination of the waste as part of their investigation.